Been a little slow updating the blog, but if you follow me on twitter you'd see that I've put out two music tracks on Newgrounds.com

The Trial of Healing - One of the rooms you may enter to restore your health. Will you be chosen to take trial though?

Explore The Tower - The main "Overworld" theme I guess, this was written in an attempt to capture the vibe i'm going for with the game. While not exactly what I had in mind, it will still take it's place within the game, and may even be due an upgrade if time permits

They've had a bunch of plays, downloads and people seem to like them, so I'm happy. Other peices will be written in this style,

I have been a little stuck elsewhere though. Specifically with the programming.

I haven't really mentioned the mechanics, so I'll explain.

Growth is a 2d platformer that follows the journey of a small creature collecting pieces to take different forms. These different forms allow for a change in gameplay, specifically I want, right from the title screen, to allow the player to climb the walls and the ceiling and create puzzles around the mechanics. Later, as combat and terrain changes these mechanics begin to be removed and given to the player, at their own choice (that will be explained later.

A lot of planning will go into the level designs to account for this, but for now I'm more focused on making sure the mechanics work and are fun to use. I've managed to get basic results when programming, even changing terrain and have attempted to implement gravity. I am now aware that I will need to have the code know when I am touch a wall piece, floor or ceiling in order to be able to climb, walk or stick to them. The issue is, looking at others codes for jump arcs, I don't need to do half of the complex stuff that I am doing. I've been trying to run everything within one behavior (a wad of code that does a thing you want for all you n00bs reading) because of the necessity to activate peices of code when touching certain walls, but I realise now writing this, is that I can still separate the functions (walking, jumping attacking etc) by establishing the platform and wall uses within in each separate behaviorr, keeping things nice and simple to work with.

In an effort to visually show this to myself, I have created this: 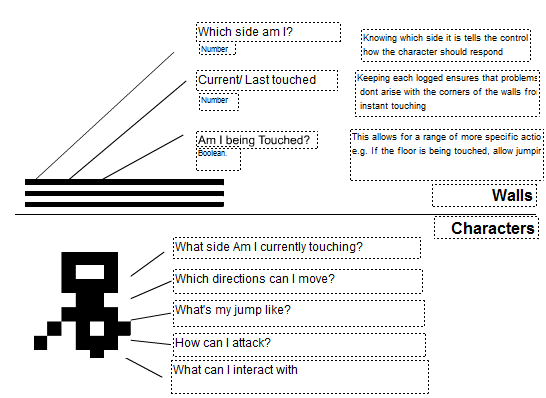 It at least gives me a starting point for the week ahead. I want the engine down within the next two weeks so I can draw, level design, sound design and maybe find time to create enemies. Time will tell what I manage to achieve, but i'm still enjoying the bus ride home in anticipation of working on this a bit more!

"Draw anything with your new toys, but stop after awhile to create the thing you got them for,"